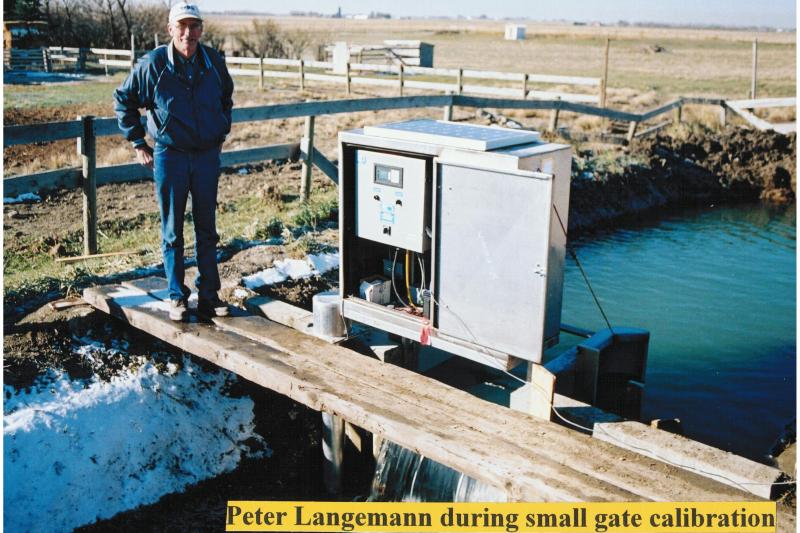 What started out as one man's invention to increase water management capacity has turned into a best seller.

Peter Langemann has been recognized by industry for his Langemann Gate, and a myriad of other inventions.

"We have honoured Peter with a Certificate of Appreciation for his lifetime of dedication to bringing innovative solutions to the challenges in irrigated agriculture and his inspiration to Aqua Systems over the past 15 years," says Ken Craig of Lethbridge, a senior official with Aqua Systems 2000 Inc. which is making and marketing the Langemann Gate.

Earlier this year, the 400th Langemann Gate was supplied to the irrigation industry in North America.

Meeting special needs on his irrigated farm just west of Coaldale has been the Mother of Invention. Langemann has turned those needs into physical farming and irrigating aids, making him the Father of Invention.

Those years of work, especially development of the Langemann Gate that allows water managers to regulate the level of water upstream and downstream from the gate, Langemann previously received a distinguished service award from the Northwest Irrigation Operators Association.

It all started in 1978 when Langemann searched for a solution to a problem faced by all irrigators at the end of a canal with no spillway or drainage system for any surplus water. It meant any water that came to his farm had to be used on the farm. It also meant if there was any water shortage in the canal, he had to do with what was available.

The surplus meant water wasn't used as efficiently as possible. The shortages, after he replaced flood irrigation with sprinklers, meant he couldn't be sure of a constant supply of water needed for the pumps to work properly.

He developed the LOPAC Gate, and installed one in the canal adjacent to his farm. It paid quick dividends because it assured a constant flow of water. Gone were the days when up to 12 water users on four laterals stretching from his canal pondered water shortages with charges of somebody stealing water they had ordered from the irrigation district ditchrider.

He said one of those early gates installed east of Coaldale continues to operate efficiently, with virtually no maintenance.

His big invention, the Langemann Gate, was registered with the patent's office, and Langemann signed the patent rights, and royalties, over to the St. Mary River Irrigation District.

AquaSystems 2000 Inc. won the right to manufacture and market the gate. Handsaeme Welding in Coaldale is the manufacturer.

Langemann also developed a water flow monitor designed to help irrigation districts and irrigators know how much water was being used on a farm.

An improved version has a mechanical flap, that when activated when water begins to flow in the pipe, triggers a water flow hourly monitor to measure water consumption, based on the water allocated to the farm and the pressure.

In normal years, the monitor is for records. In a year like 2004, when SMRID irrigators were limited initially to 12 inches of water per acre, it became a key management tool to alert the district and farmer when that rationed limit was near.

It doesn't mean a farmer has to stop irrigating crops such as alfalfa, but it means the farmer will have to purchase additional water rights from other farmers, or shift some allocation from crops which use less than 12 inches per acre, to continue.

Langemann said inventions often run into criticism. "I have been fortunate with my inventions to earn the respect and support of irrigation district staff and irrigation farmers," he said. "It helps with encouragement."