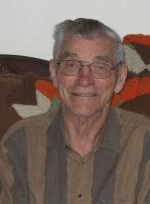 PETER JOHN LANGEMANN, beloved husband of the late Edna Langemann, passed away on Saturday, May 26, 2012 at the Chinook Regional Hospital after a brief illness. Surviving his passing are his sisters, Kay Cahoon of Langley, BC., Anne (John) Dunn of Vanderhoof, BC., and Agnes Thibert of Lundbreck, AB. and in-laws Maxine (George Griffiths) Vogt, Ron (Betty) Salahor of Calgary, AB. and Russ (Connie) Salahor of Victoria, BC., many nephews, nieces, relatives and friends. He will be fondly remembered and sadly missed by his family, friends and neighbors. Peter was born in Coaldale on June 12th, 1927 and lived most of his life on the farm originally owned by his parents John and Anna Langemann. He married Edna Salahor in 1969 and together they turned their land into a small piece of paradise which included Edna’s abundant garden and flower beds and Pete’s lush grain and sugar beet crops. The years that followed were the best of times for both of them. Besides his farming, Pete was involved with various early community organizations including the Forbes Lateral Water Users Association, Coaldale Mutual Telephone Company, and Sugar Beet Growers of Alberta. He was on the board of the St. Mary’s Irrigation District for many years and was Chairman of the Board till his retirement in 1997. During this time he worked on and developed the LoPac Gate which was used in the district to control the flow of irrigation water. The gate was improved on by him in the next few years and the Langemann Gate is used today to control water flow by many irrigation districts in Canada and the U.S.A. His work with the S.M.R.I.D. occupied much of his time and was always directed at benefiting the community he lived in. As time went by a certain amount of physical frailty caused him to cut back on farming and community work. In 2008 his beloved wife, Edna, passed away and he never quite recovered from this loss. He was able to stay in his own home aided in a large part by his neighbors who essentially became his family by helping him in so many ways. He was totally appreciative of their help as was the rest of his family. The Funeral Service will be held at CORNERSTONE FUNERAL HOME, 2800 Mayor Magrath Drive South, Lethbridge on Saturday, June 2, 2012 at 1:30 PM with Pastor Gerald Klassen, officiating.